WHAT IS FELINE HYPERTHYROIDISM 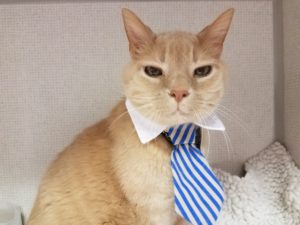 The thyroid gland, located inside the lower neck, plays an important role in regulating the body’s rate of metabolism. Hyperthyroidism is a disorder characterized by enlargement of the thyroid gland, followed by subsequent overproduction of thyroid hormone and an increase in a cat’s metabolic rate. This condition is relatively common in senior cats.  In the majority of cases, the thyroid gland enlargement is a benign tumor; less than 2% involve a thyroid gland malignancy. Many organs are affected by hyperthyroidism, including the heart. The disease stimulates the heart to pump faster and more forcefully, and eventually the heart enlarges to meet these demands. The increased output of blood from the heart may lead to high blood pressure and, in some cases, heart failure. The liver is also susceptible to damage by overproduction of thyroid hormone, as are the kidneys and gastrointestinal tract.

The cause of hyperthyroidism in cats remains unknown.  Environment and diet have been investigated and may play a role in predisposing cats to hyperthyroidism, though the specific risk factors and mechanisms are unknown. No breed is known to be at increased risk.

The typical cat with hyperthyroidism is middle-aged or older, though the condition has been reported in younger adult cats as well. The most consistent finding among cats with this disorder is weight loss secondary to the increased rate of metabolism. Many cats compensate for this loss by eating more than usual; some hyperthyroid cats may develop a ravenous appetite. Despite the increased intake of food, most cats gradually lose weight. The weight loss can be so gradual that some owners do not notice it until their cat has lost 10–20% of his body weight. Affected cats may also drink more water and pass larger volumes of urine than they did prior to developing this condition. Other physical symptoms include periodic vomiting, soft stool or diarrhea, and an unkempt hair coat. Some cats develop anorexia as the disease progresses. Behavioral symptoms include elimination outside the litter box, increased irritability, increased activity levels, increased vocalization and other changes.

Systemic hypertension and thyrotoxic cardiomyopathy (heart muscle disease resulting from excess thyroid hormone) are complications that will often occur over time in untreated hyperthyroid cats. Both of these conditions are treatable and reversible with appropriate treatment, especially if the conditions are diagnosed at an early stage. Left untreated, congestive heart failure and hypertension complications such as strokes and blindness may occur.

In most instances, diagnosis of this disease is relatively straightforward: 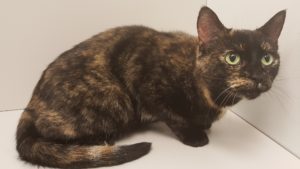 Options for treatment of hyperthyroidism in cats include radioactive iodine therapy, medical management (most often oral medication), dietary management, and surgical removal of the affected thyroid gland(s).   Because the large majority of cats with hyperthyroidism do not have cancerous tumor growth, treatment can be completed in most cats using relatively low dosages of radioiodine.   (Cats with cancerous tumors will require much higher dosages of radioiodine).

Radioiodine treatment is considered the gold standard treatment for
hyperthyroidism in most cats, especially in younger cats and those without
advanced kidney disease. It is curative 95% of the time with a single treatment (especially when done earlier in the disease process), and in most cases, treatment with radioiodine eliminates the need for long-term oral thyroid medication. It is the most effective and least invasive way to destroy all of the abnormal thyroid tissue. Veterinary clinics must be specially licensed to administer radiation therapy. After treatment, patients must be hospitalized until their level of radioactivity has declined to a level that is low enough to allow release back into their homes (usually 1-5 days at our facility).

Administration of an oral drug, usually Felimazole (methimazole), can interfere with thyroid hormone production and thus control the effects of the overactive thyroid gland.

The large majority of cats tolerate this drug quite well. However, some cats may react adversely to the drug. Some side effects (vomiting, decreased appetite) may resolve by use of alternate routes of medication administration. More serious side effects (self-trauma from intense itching, significant liver enzyme elevations, progressive anemia, etc.) generally require that the medication be permanently discontinued and alternate treatment options be considered.

Because medical management is not curative (blunts thyroid production but does not destroy the tumor), the tumor will continue to grow in most cats. With time, as the tumor significantly enlarges, the cat may become resistant to the thyroid medication, requiring higher and higher dosages for better control, with some cats becoming medication resistant altogether. Unfortunately, these cats that are later in the disease process and with larger tumors are also more difficult to successfully treat with radioiodine as well.

Since medical management of hyperthyroidism is not curative, it does not destroy the abnormal thyroid tissue. Thus, the drug must be given for the remainder of a cat’s life. Oral medication must be administered daily (usually twice per day), and the dosage often needs to be adjusted periodically to maintain normal thyroid hormone levels.

Bloodwork is generally done every three to six months to monitor thyroid, liver, and kidney values but may need to be done more frequently if the thyroid levels are not well regulated or if there are concurrent health issues.

Dietary management: In late 2011, a prescription veterinary diet was introduced for the treatment of hyperthyroidism in cats. Although the exact cause of hyperthyroidism has not been identified, a diet low in iodine has shown potential as a means of reducing elevated thyroid levels.   Cats being treated with diet alone must eat the diet exclusively.

Surgery: The fourth option is surgical removal of the affected thyroid lobe(s). Because hyperthyroid cats are usually older and because heart and metabolic abnormalities are associated with hyperthyroidism, a degree of risk is involved. Surgery is a more invasive procedure, and postoperative complications may arise. If ectopic thyroid tissue (tissue in abnormal locations) is not detected and therefore not removed during surgery, hyperthyroidism may redevelop.  Depending on the patient and the patient’s owner, surgery may be an appropriate treatment option (and it is considered a cure, as is radioiodine), but in most cases, radioiodine is preferable.

The outcome following treatment of hyperthyroidism is usually positive, and most cats have a good chance of returning to an excellent state of health for many years.  It is one of the few diseases in older cats that we can easily treat, and even cure (with radioiodine in particular), though there are pros and cons of all available treatment options.

No preventive measures are known, but we recommend that middle-aged and geriatric cats have a complete physical examination by a veterinarian every 6 months.